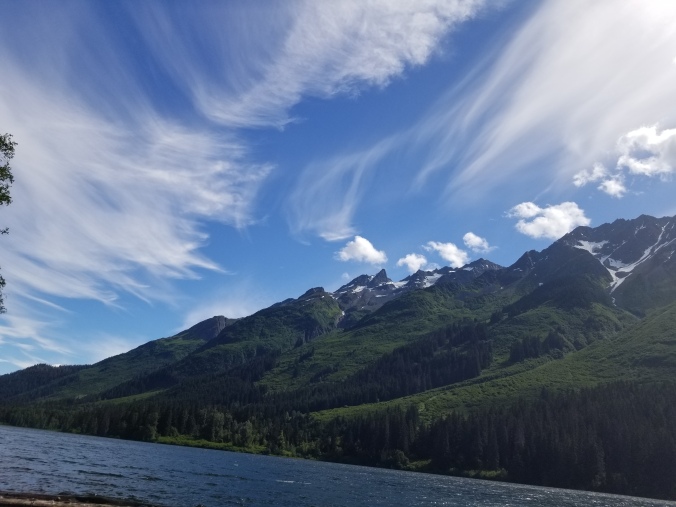 We were excitedly looking forward to our 2nd summer in Alaska. After months of cold and snow, we were looking forward to working in our mountain’s rich soil to grow a plethora of tasty, fresh vegetables, and beautiful flowers.  We started hundreds of seedlings indoors in February and March. Unfortunately, in our excitement, we had begun the growing process too soon, and many of our little seedlings were being suffocated in their small pods inside, while we  were waiting for the ground outside to thaw and for warmer temperatures to come. We waited and waited, and eventually, we planted lots of seedlings too early and they struggled to take root in the cold temperatures and lack of sunlight. Some vegetables did fine, but others, not so well. We started another batch of seedlings indoors, convinced that even though they were started late in the growing season, they would do great. 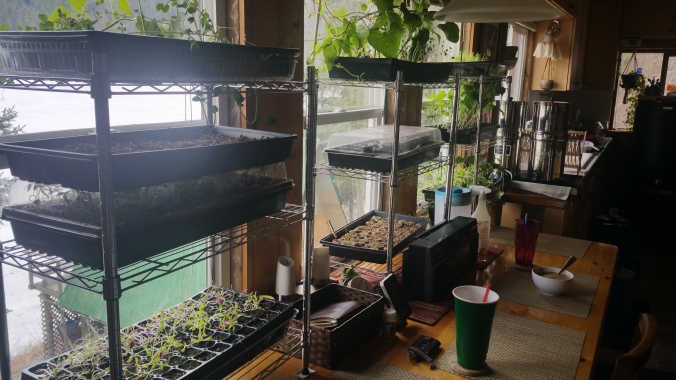 When we finally started moving seedlings for planting outdoors, we ran out of space quickly. Nate made four new terraced bed areas, and dug out a wide spot to the side of the house for planting potatoes. We spent weeks digging in the dirt, and hauling dirt into the new terraced beds. 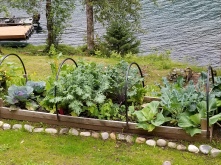 This was the scene outside our window for most of the summer.  The weather forecast every day: “Partly cloudy, chance of rain”

We kept waiting and waiting for the beautiful summer we had last year to arrive. But, the gray clouds, cooler than average temperatures, and drizzling rain continued.   Everything in the garden struggled. The vegetables that are doing well are ripening very slowly. Even the flowers have tarried with the lack of sunshine. We cultivated our wild strawberry patches this year, and they brought in a good harvest, although about 6-8 weeks behind last year’s crop. Last year, it seemed that the blueberries, salmon berries, and high bush cranberries all fruited about the same time and we spent hours, days, and even weeks berry picking. I haven’t seen one blueberry or salmon berry yet this year. I recently picked all of the high bush cranberries on our property and I am noticing them fruiting around the lake and around town, but I think they are in much smaller quantities than last year. The wild flowers that were so beautiful last year tried to start blooming in May, but most of them died quickly, and the wide variety and succession of differing varieties never came. Last year, there would be miles and miles of dandelions on the side of the road. These would die and then another wildflower would bloom and die, then another and another, until the beautiful blooms of Fireweed would appear as the final act. In Alaska, they say that when the last Fireweed bloom dies, winter is coming. Unfortunately, we only saw two or three successive wildflower blooms, and the Fireweed appeared in early July and was all dead by August. Lets hope that the folklore about the Fireweed is not true or that would mean winter is coming now. 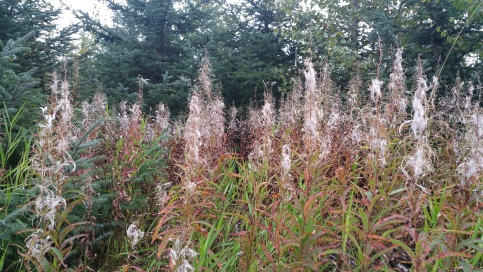 We were able to harvest some lovely vegetables from our garden, including a variety of lettuces, beets, peas, broccoli, cauliflower, zucchini and onions. We are still awaiting the final ripening of our garlic, potatoes, carrots, and edamame.  Rhubarb grows great here. I don’t think anyone has trouble growing Rhubarb.

With an eye toward the future, we also planted about 150 berry bushes, 50 of each blueberry, raspberry and blackberry. Bramble bushes do very well here in this climate. We also planted 4 cherry trees. The transplants have done well so far, but they won’t be ready to fruit for a few years. This year is an “establishment year” for these berries.

When I was just getting used to the fact that this doom and gloom will be our entire summer, the clouds lifted, and the sun came out to remind us what summer feels like. We had four beautiful days of high 80 degree temperatures. We put on our bathing suits and drove around the lake. Our neighbor had a party, and there were tons of boaters on our lake. (You have to understand that 5 or 6 boats in one general area is a “ton” here!) That weekend, about 20 people were swimming in our lake. Nate jumped in, but he drank more beer than I did. It was probably 50 degrees. The news reported that we broke all kinds of records for high temperatures during those 4 days, including one for 88 degrees and one for 89 degrees. The Chilkat bridge reported a reading of 93 degrees. Those kind of temperatures are unheard of here.

After 4 days of summer, the clouds returned and have remained since then. Our gardening friends with greenhouses are the only ones who are reaping a really good harvest. We do have “build a greenhouse” on our to-do list for this summer, and we are learning first-hand how important this will be in the future.

We have many other building projects on our to-do list to get done before winter. Most of the summer has been spent on new construction projects.  Our first project was building a new boat dock, including a fish cleaning station and storage area with a roof. Our old boat dock was 4 ft wide x 20 ft. long. The new one is double that, 8 ft. wide x 40 ft. long. 14 feet of the new dock is covered and partially enclosed. This project was a major undertaking, and I was amazed every day to watch Nate’s ideas take shape. The way that this thing came together is incredible to me. Nate cut down 4 large trees on the property, cut them to 40 ft. long logs, then tied them together, put a frame around them, filled in any gaps with large styrofoam, then built the dock on top. Nate cut down 2 100 foot trees on top of the ice, with the idea that he would float them over. Once the ice melted, he floated these down to the dock place on the water.  It was mind-numbing to watch Nate calculate and build it. I am in awe over the carpentry skills he has amassed while living here. It’s hard to believe he never built anything before moving to Alaska (Although he did build a pretty cool chicken coop the last year we were in Texas.)

We are finishing up the addition to our cabin, which will be a first-class work out room. We also put a large deck with stairs around the workout room, connected it to the house, and started building a wrap around deck in front of the house. 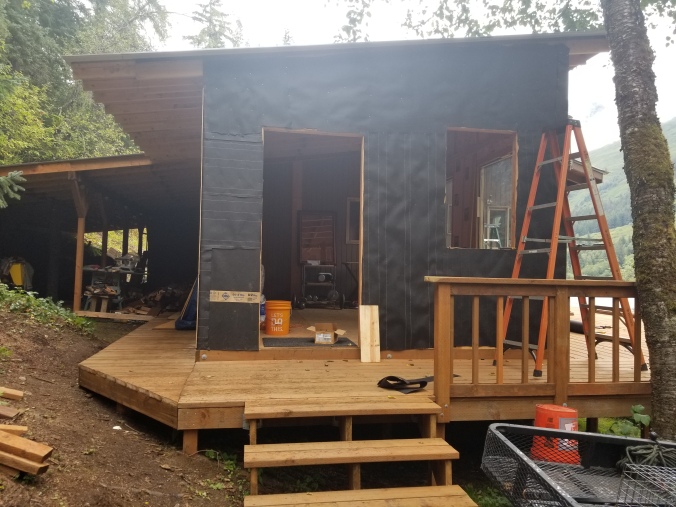 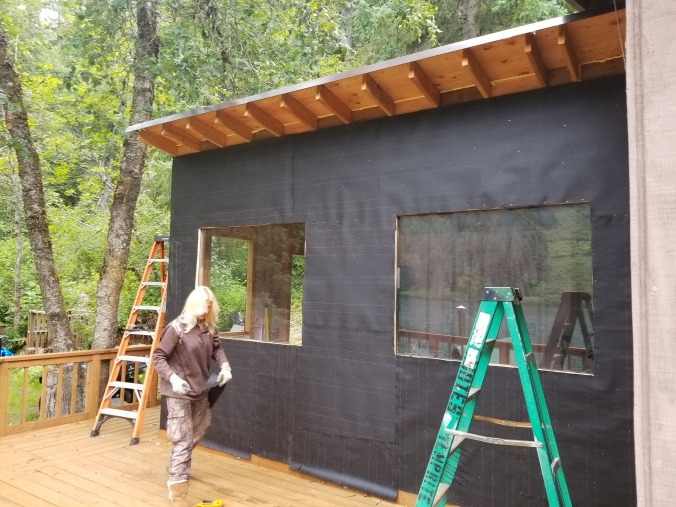 We also added another sundeck in front of our hot tub. 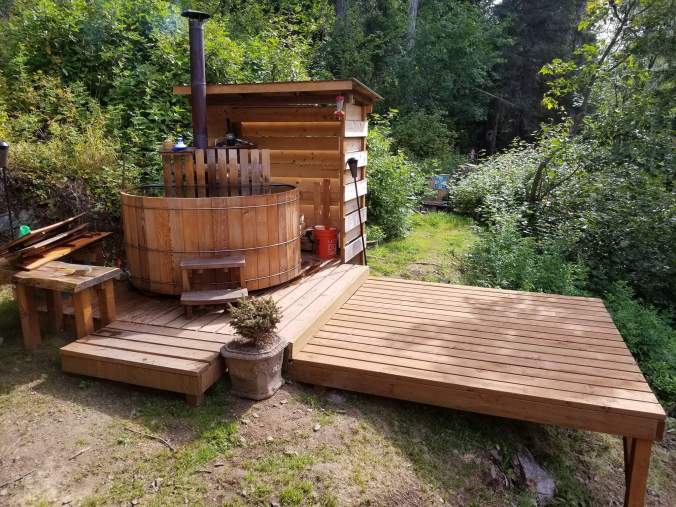 One of the difficult things about undertaking so many construction projects, is getting the supplies to our property. Every piece of wood, bag of cement, bag of screws, aluminum roofing, and more has to be purchased in town, transported to our boat landing using our truck, then loaded into the boat, driven on the lake to our property, then unloaded from our boat dock up the hill to our house. Since I am the grunt construction worker apprentice, most of the hauling of the supplies up the hill to our house has been my job. I don’t mind getting in a little extra workout this way, but some of those 16 foot pieces of wood are cumbersome, and the bags of concrete weigh 60 lbs! Our physical labors being what they are, we typically require a nap every afternoon. It has become a requirement that we have “quiet time” every day between 2-4 pm. We stick with this schedule, even when guests are visiting. We just let them know ahead of time that they are welcome to rest in their own quarters during this time, or do something quiet on their own (basically, leaving us alone to re-energize at that time.) With this late afternoon power nap, we are able to continue working outside until around 8pm in the evenings. (For most of the summer, it doesn’t get dark until midnight.)

Our to-do list before winter includes cutting lots of firewood, building a greenhouse, and replacing the roof on our guest cabin. We re-painted the aluminum roofing on the guest cabin last year, and we were heartbroken when the snow and ice melted off of it and took the new paint right along with it. It was alot of time and money to repaint that roof last summer to lose it all in one winter, so we have decided to simply replace the aluminum roofing, and fix it for good.

Last summer, we painted the guest cabin. Here it is nice and pretty! 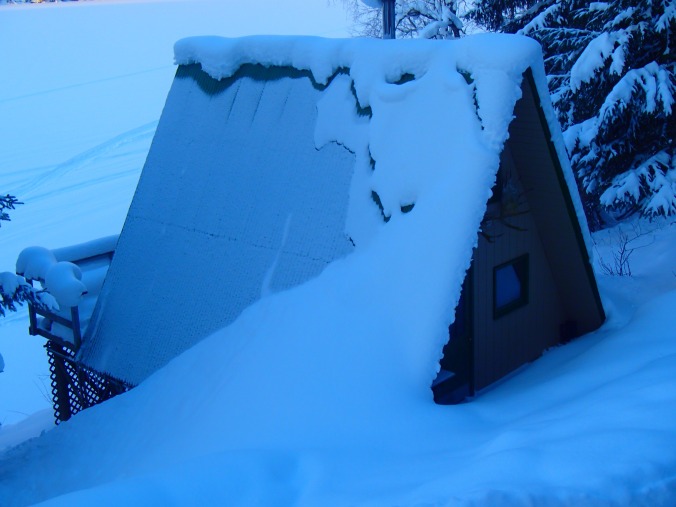 The winter snow and ice took its toll on our little guest cabin. 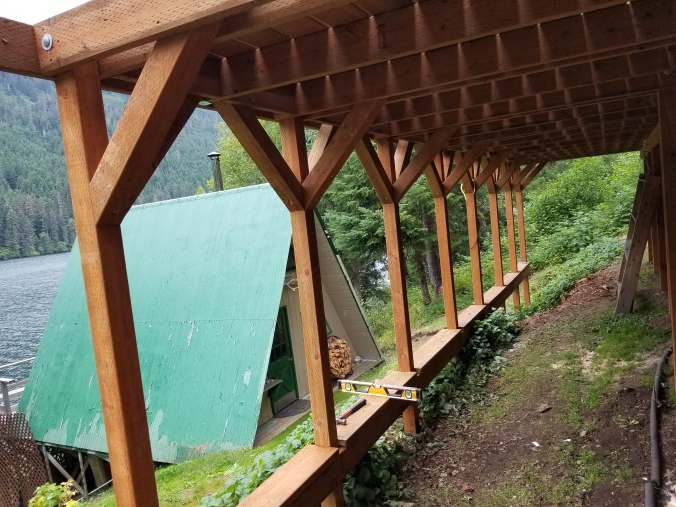 Side view of the guest cabin shows the peeling paint

While we’re showing pics of “out with the old, in with the new”, it feels like we should mention that the borough replaced the bridge that we cross from the main highway to our little Chilkat Valley Road. Our quaint little steel bridge was replaced with a more modern cement bridge. Our small road also leads to Porcupine Creek Road, which takes you to the famous Gold Nugget Mine. We’ve heard that the new and additional mining being done up Porcupine Creek Road necessitated the building of the new, stronger bridge. (Although the official news report says that the old bridge had structural issues.)  Maybe Nate and I should be panning for gold out here in our spare time! 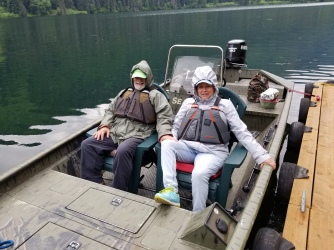 Although we have been busy with lots of home improvement and garden projects, we have made time to host lots of guests this summer. My daughter came for a week. Nate’s friend, Supa, came for a week, and Nate’s mom and boyfriend came for 2 weeks. We also hosted a couple that lives in town that had never visited Chilkat Lake. We have also made time for enjoying the outdoor life. During the “salmon run” Nate netted silver salmon (sockeye) in the river, and caught 30 large ones in a short couple of hours. They are so big that the meat has almost filled our freezer completely. 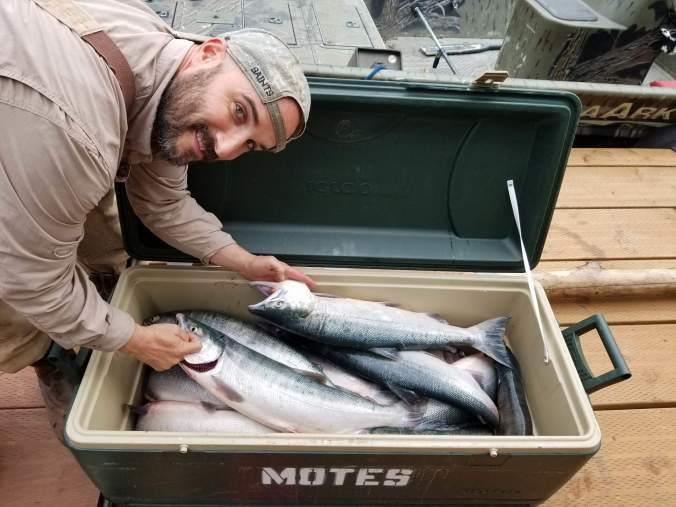 The silver salmon begin molting when they reach our lake. They return here every year to spawn and die. It is amazing the numbers that return every year. So far, the fish and game counting weir station has counted 20,000 salmon returning to our lake to spawn and die. They pool in shallow areas, which makes them excellent bear bait. They pool in large numbers on the banks of an area we call, “Bear Beach”. Nate says it looks like a coy pond where these bright red and orange fish pool together.

Needless to say, Bear Beach is a great place to see a bear (or two, or three)…

Nate is also still hoping to tag a brown bear and a black bear during the second season for hunting. He has his tags ready, and he is confident that he will meet up with some brownies and blackies soon. Our friends were able to secure moose-hunting tags this year, and we will accompany them on their annual moose hunt—a weeklong camping trip in the woods by a river. It should be fun watching them hunt for a big moose.

When Nate’s friend, Supa, was visiting, he remarked at how Nate waves to every passing boat, truck or car whenever he is driving. Supa says he does this incessantly, even though lots of people don’t even wave back. It doesn’t deter him. Supa says in a few years, Nate should run for the mayor of Haines, and when he does, his campaign slogan should be, “Vote for Waving Nate”